When the iPad Pro first launched last November, my first impression of it is like all others’ – Who on earth is this gigantic iPad for? As time went by, after earning enough money on my job and careful considerations, I decided to buy one and find out the reasons myself.(I got the iPad Pro at a discounted price of 799 at Staples)

Well, it is a huge iPad, and I don’t know how to describe my first glance on it on the stand at Staples. It’s like upgrading your Macbook 11 to MacBook Pro 15, seriously, because I have gone through the switchover from MacBook Pro 13 to 15, I can definitely tell that the shock in switching to iPad Pro is even greater. When I got home, I immediately started to transfer my data from my iPad Air 2 to my new iPad Pro. However, I quit this process and made a bold decision: I am not gonna to use those apps that haven’t support the iOS 9 features and iPad Pro resolution any more! Since I bought this device to act as a potential laptop replacement, I believed I am not going to fully blow its potential without using the right apps. 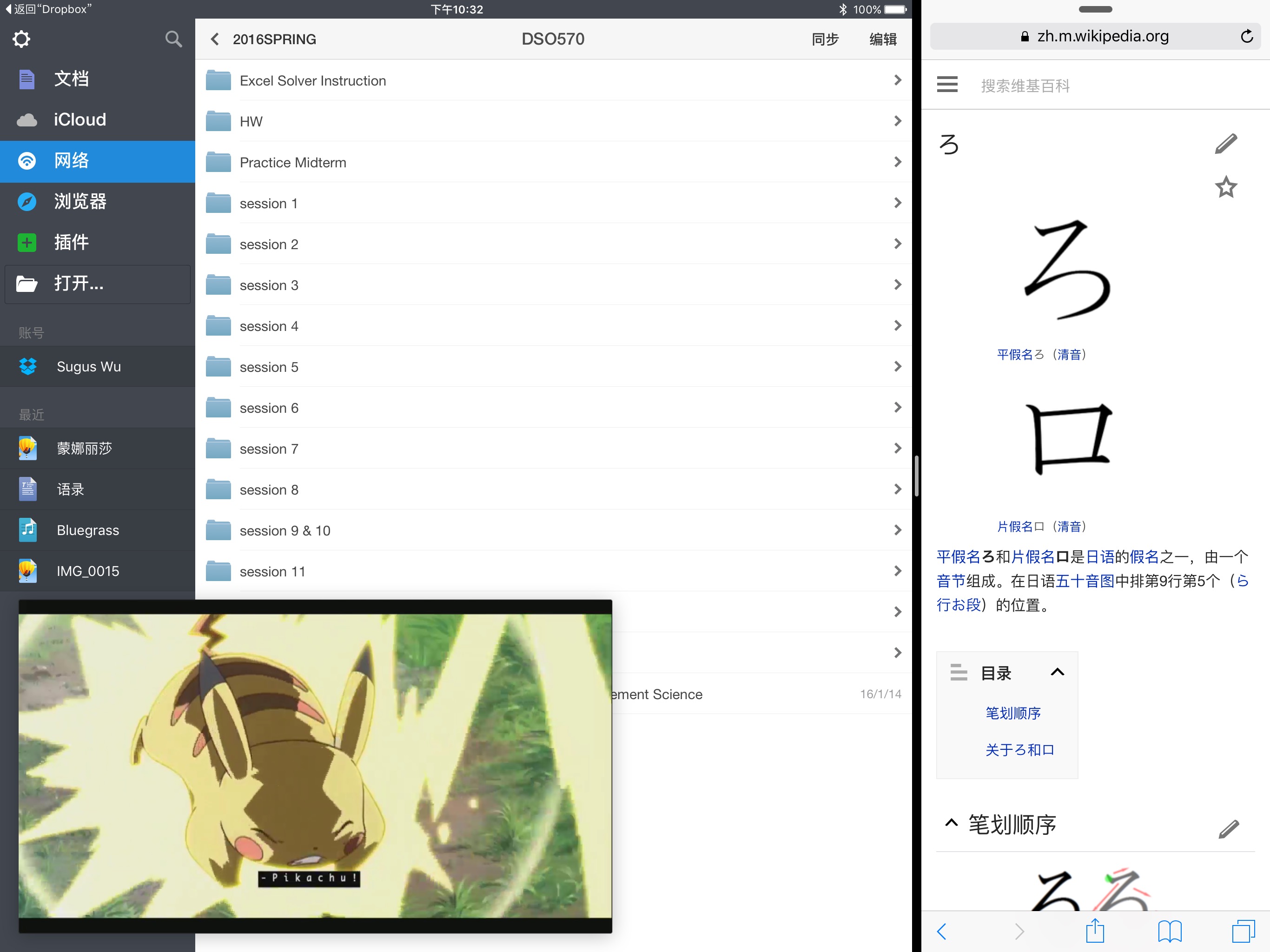 Nevertheless, after installing the apps I needed, the same thing happened to others also happened to me: why would I use this piece of metal when I have my versatile PC and MAC in front of me? Even equipped with the Smart Keyboard and Apple Pencil, I still could not feel the necessity of this device, so I started to feel a bit regretful about buying this product. Apple nowadays no longer excels at every aspect since its launch of very disappointing Apple Watch and MacBook 12. To tell the truth, as a big apple fan who started with the 1st generation iPod touch back in 2007, I felt really unhappy about what Apple is delivering to customers now.

However, things started to change with my journey to New Yord during spring break. Because I don’t have any tough work to do on work and with the geeky heart that can’t live well without computers, I decided to give iPad Pro a try for several days. Amazingly, iPad Pro started to shine under these “travel” situations. Comparing to laptops and desktops, it is much lighter in weight but not smaller in size. Moreover, it has one of the most powerful hardware lineup inside. Finally and most importantly, iOS is not as weak as people’s expectation!!

You can certainly say that there’s no file management system in iOS, and there’s no good input device as keyboard does on laptops, and so on. We can always find a reason to deny a product, but what if we really use if for a while and adapt to its logic? Hard, sure, people who are used to PC would prefer Windows and those who are used to Mac would prefer OS X. Has anyone considered if one is born with only access to iOS devices, will he survive and even live well?

The answer is YES! That’s what I find out during my trip. I used it as my only device to write emails, edit photos, watch movies, read books, write posts, compose songs, manage Dropbox files, read tweets and so on. Don’t tell me something that iPad Pro can’t do because even laptops cannot handle them well, for example, 4K video editing. With Apple Pencil, I can even jot down notes, sketches, and act as an extended finger to help me navigate in iPad Pro’s laptop mode. Frankly, iPad Pro does have the capability to cover over 90% of the work people typically do on laptops.

For programming, I use Diet Coda 2 editor which even has a terminal inside, and I use it to access to my Linux server then I can use vim to write code. For those who say we can’t write code on iPad, I think you need to think twice now. Honestly speaking though, iPad Pro is more suitable for those who have a running desktop or laptop at home, because in this case iPad Pro is nothing short, thanks to Jump Remote Desktop! I use it to access my Mac and PC when I was in New York, and it worked extremely well to cover up those things that iOS can’t do. As for file management system, I strongly recommend people use Dropbox for their working documents, and iOS has GoodReader 4 and Documents from Readdle to act as a good file management system.

To sum up, if you have most of your files on the clouds and you are a go-to person, and you already have a laptop or desktop at home, and if you have an older iPad and consider to make iPad your go-to device in your mobile lifestyle, going for a iPad Pro is not a bad idea. Surely it requires you to pick up the “productive” logic on iOS device, but trust me, the functions you think iPads are not capable of, might have been supported long long ago, and you just don’t know.